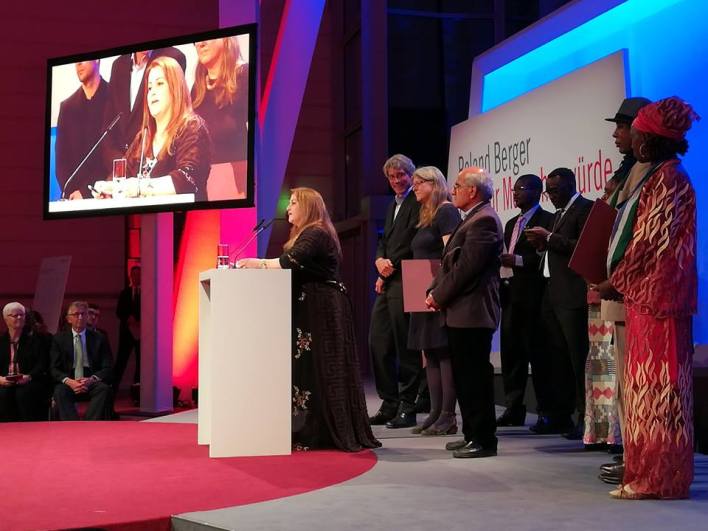 On the evening of May 4th, 2017, in a ceremony held at the Jewish Museum in Berlin, the Roland Berger Foundation honored the current winners of its eponymous award.

Wadi received the Roland Berger Human Dignity Award 2017 for its longstanding and successful campaign for the human rights and autonomy of Iraqi citizens.

“For the past 25 years, WADI has initiated and run a wide range of programs in northern Iraq – from information campaigns about female genital mutilation to children’s education programs to medical and psychological first aid offered to Yazidi victims who have been tortured by the terrorist organization IS. It is the founder’s wish that other organizations around the world follow the example set by WADI.” Roland Berger

Currently, one of WADI’s main focus is on helping Yazidi women who have escaped the barbaric captivity of IS terrorists in northern Iraq.

Presentation of the three Award winners:

President of the Bundesrat and state premier of Rhineland-Palatinate Malu Dreyer gave the laudatory speech. She expressed her deep respect for all three award winning organisations, but underlined how much the long breath of Wadi is impressing her.

Founder Prof. Dr. h.c. Roland Berger and Ambassador Prof. Dr. Harald Braun, Permanent Representative of Germany to the United Nations in New York, awarded the accolades.  Cheman Rashid from Wadi’s Dohuk program gave a speech, accepting the award on behalf of Wadi and all it’s members and supporters in Iraq and Germany.

In her note she said:

“WADI is working on the ground for more than two decades – and it is working with the people rather than just for them. I mean that literally. (…) So WADI is not just a chairperson, a board, a team here and beneficiaries there – it is the many people who work and live in the programs here and there”

This encouragement is of great importance for us. It shows that we are not alone – that you care.The price WADI receives today honors them all, us all – and we all are thankful that you chose us as one of the organizations to receive the foundations’ award this year.

Video Stream of the event: