In 2017, the social and security situation in Northern Iraq deteriorated further and WADI faced many tasks and challenges. Nevertheless, the team spirit remained high, and all colleagues were very committed to make a difference.

WADI continued its efforts to raise awareness on female genital mutilation (FGM) and other forms of gender based violence, and again the teams reached thousands. WADI also started a comprehensive programme to help women in distress and female prisoners to obtain their social and legal rights. 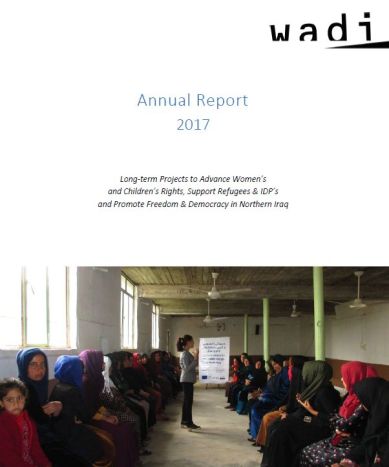 On the field of independent media, WADI extended its activities by including the news media outlet KirkukNow which is producing and publishing unbiased first-hand accounts in four languages from the so-called disputed territories. In cooperation with the Duhok-based Jinda day care center which was opened by WADI in 2015 and then became an independent local organization, WADI continued its emergency help for traumatized Ezidi girls who have returned from Daesh slavery.

In 2017, following the decline of the economy, limited rule of law and growing instability, rising levels of violence, especially against women and children, have been witnessed in Northern Iraq. As a consequence to these disturbing developments, WADI launched its region-wide campaign against violence in November. First focus has been teacher violence against school children. Five schools already solemnly declared themselves violence-free – a promise that pupils at these schools will not be beaten nor face any other form of violence from the teachers’ hands.

In Germany, WADI implemented the project „From refugee to citizen“. Hundreds of recently immigrated refugees participated in training workshops where they learnt about ways to participate in communal decision-making processes and pursue their interests within the framework of established democratic procedures in the German system.

In April, as an encouraging recognition of its achievements, WADI received the Roland Berger Prize for Human Dignity “for its longstanding and successful campaign for the human rights and autonomy of Iraqi citizens”. Two Iraqi colleagues were able to travel to Berlin to accept the prize in person.

WADI received another award from the Iraqi-Kurdish Ministry of Health and Heartland Alliance for its efforts to provide psychosocial support for refugees and IDPs.

The supreme spiritual leader of the Ezidi community, Baba Sheikh, awarded WADI for its commitment to support the Ezidi people after the attempted genocide and the countless atrocities committed by the so-called Islamic state.

The total number of direct beneficiaries of Wadi’s activities in 2017: 9,104 persons, almost exclusively women and children.

We estimate another 50,000 indirect beneficiaries, which include listeners of the radio, readers of KirkukNow, families in towns and villages for which WADI services were provided, and families who were informed by the anti-violence campaign through the media.