Activists in the Kurdistan Region continue the fight to eradicate FGM

ERBIL (Kurdistan 24) – On Wednesday, the International Day of Zero Tolerance for Female Genital Mutilation (FGM), the United Nations mission in Iraq announced it was reaffirming its commitment to ending what it called “one of the most inhuman acts of gender-based violence in the world.”

According to the UN’s best numbers available, 7.4 percent of girls in Iraq are mutilated each year, but in the Kurdistan Region, the practice is performed at a significantly higher rate.

From its offices in Sulaimani, workers from the WADI organization have tirelessly campaigned for over a decade with authorities and with religious leaders that have been willing to speak to them.

They have also made hundreds of trips to rural areas where FGM is most common to speak to villagers and give classes and presentations to educate women and local officials on the grave emotional trauma and serious health risks it poses.

Over time, this multi-pronged attack has proved to be a strategy that has worked. Aside from the local effects of their constant advocacy, the group’s efforts have also brought much greater international attention to FGM occurring outside of Africa and were crucial to the process that led to the Kurdistan Regional Government (KRG) passing a law in 2012 that banned it. 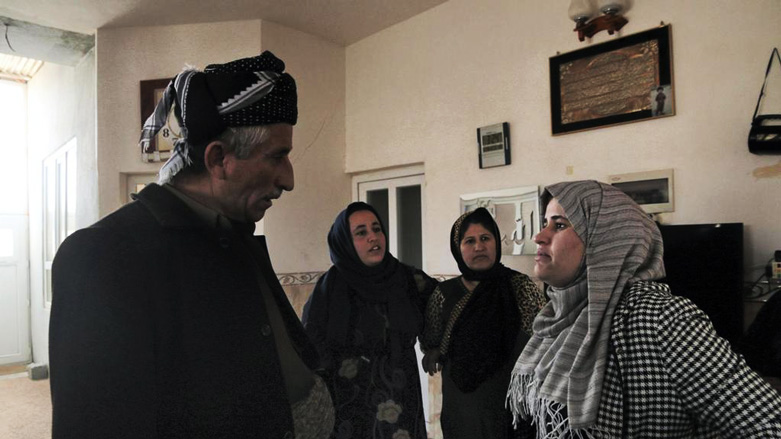 A field worker for the WADI organization, Kurdistan Rasul, advocates against FGM in a discussion with a village elder in a rural area of the Kurdistan Region. (Photo: The National/Florian Neuhof)

The Family Violence Law, referred to sometimes as “Law Number 8,” went into effect in August 2011 and included several provisions aimed at eradicating FGM, as well as addressing other issues such as domestic violence. Humans rights organizations universally hailed the law’s passage, but have since often complained that the KRG has not adequately enforced it.

“I think it’s very important that we focus on Law Number 8, that is not being implemented as it should be,” Shokh Mohammad, WADI’s Women Project Coordinator, told Kurdistan 24. “There still has not been one case where it has been prosecuted.”

She explained: “There is a hole in the law that says a victim needs to press charges, and this is not possible for a girl. Things like this make people not really take the law seriously, so they won’t turn to it. This is not just for FGM, but for all of the law.”

In 2018, WADI met over 2,977 women and girls, according to an online statement released on Tuesday. “We have recorded 315 cases of FGM within the age range of 0-18. The areas of focus were Garmyan, Ranya, and Erbil. Ranya had the highest rate and Garmyan the lowest.”

Although the group states that these results show a “great decline” in the brutal practice since current efforts to eradicate it began, it should be noted that the number given is only the cases the field workers could positively confirm.

As Human Rights Watch found in field research conducted a year after the Family Violence Law was passed, an unfortunate side-effect of criminalizing FGM is that it has caused families and those continuing to practice it, often midwives, to hide it more than they had before. This has made it more difficult to collect reliable data on how pervasive it still really is.

“They do this in so much secrecy that the information does not get leaked,” Mohammad said.

At a recent conference on FGM in Egypt, the KRG, in cooperation with the United Nations Populations Fund (UNFPA), announced a new action plan to eradicate the practice in the Kurdistan Region by 2028. According to a WADI representative that attended the conference, the UNFPA was noticeably more cautious about how it worded the likely effects of the plan than a KRG official present, who confidently pledged it would be completed in just five years.

As part of the program, the KRG Ministry of Health would train staff in primary health care units to inform parents about FGM when they are doing vaccinations, and the Ministry of Education would arrange training with teachers and parents. 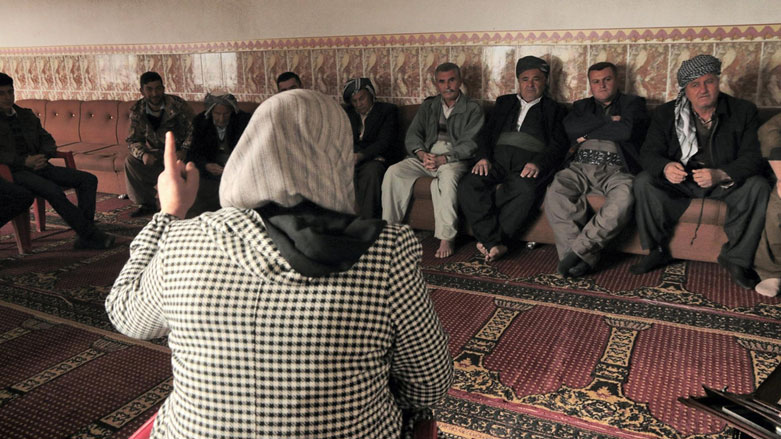 A WADI field worker talks about the dangers of FGM to local officials in a rural area of the Kurdistan Region. (Photo: The National/Florian Neuhof)

Another crucial part of the action plan would be the involvement of the Ministry of Religious Affairs, and that it would instruct imams to talk in their Friday sermons about the hazards of FGM. In the past, religious leaders have been some of the most vocal and most hostile critics of WADI’s past work and to the general notion of banning FGM.

“Many mullahs, they use the excuse of religion or that it is something mandatory to do, aside from the cultural pressure,” Mohammad continued.

In more conservative areas like the district of Ranya, she said, changing the minds of religious figures and recruiting them to the cause is an essential part of its success.

“We cannot cover all of these places, where there is also much domestic violence, female suicides, and burnings,” Mohammad said, remarking that female deaths publicly reported as suicides are often actually honor-based killings committed by family members. Recent instances of such disturbing incidents have been most notable, according to WADI’s field research, in Ranya and Erbil.

Multiple aspects of traditional social systems that have often supported or concealed such acts against women and girls need to be challenged to have a chance of eradicating FGM in Kurdistan, Mohammad stressed.

“There are a lot of different people involved in the decision to mutilate their daughters. We need to involve all of them.”