2018, the year following the Iraqi-Kurdish referendum, was still very much shaped and shaded by the staggering consequences of this decision. Trust in the institutions and the government appears to have eroded further, and generally people’s attitude seems to be more fatalistic than ever.

In this atmosphere, WADI experimented with new approaches to promote human rights.

While continuing the long-term projects to improve the medical and social infrastructure in the rural regions of Northern Iraq, which have suffered severely under the long-term impact of poison gas attacks and the genocidal “Anfal” campaign,  WADI intensified the new No-to-violence campaign launched in November 2017. This campaign stroke the right note and became rather popular soon. People supported demands like “no to violence against children” instantly, and they strived for violence-free schools wholeheartedly. 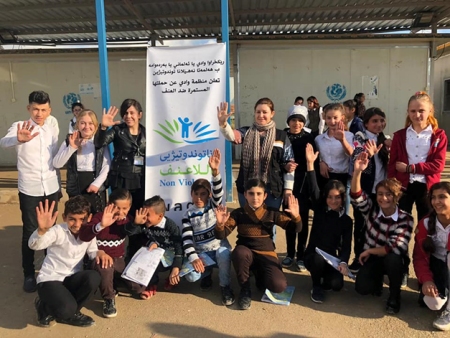 WADI started visiting schools and preschools on a larger scale, addressing children, teachers and also parents, organizing discussions and distributing awareness materials. Even the mobile playground joined the campaign to involve the very young kids and their parents. The teams are continuing to raise awareness on the dangers of female genital mutilation (FGM) – a topic deeply related to the “Stop the violence” message.

With their programs “Citizenship, Participation and Peaceful Coexistence” and “Halabja Summer of Peace and Non-Violence”, Halabja Women’s Center is also supporting the campaign as much as they can, and their program is very popular with the local population and refugees and IDPs as well.

For people in the region it has become evident that violence is a root problem of their society, and many, especially young people, are not willing to tolerate this and live with it any more. Denouncing violence is now a way to show discontent with the current living conditions, but without appearing political or partisan in any way. And indeed it is not a party issue. Violence is everywhere. And women and children are those who suffer the most from it.

Towards the end of the year, several WADI projects received considerable media attention, among them the community radio and the campaign against FGM. The Rudaw TV report “Kurdish woman dedicates life to combating FGM” is an outstanding piece of documentation of our committed teams’ tireless work.

We also continued to give assistance to Yazidi survivors of IS-captivity and Syrian refugees in Iraq.

The total number of direct beneficiaries (audience of KirkukNow not included) amounts to 14,806 persons in 2018, almost exclusively women and children. We estimate another 50,000 indirect beneficiaries, which include listeners of the radio, families in towns and villages for which WADI services were provided, and families who were informed by the anti-violence campaign through the media.

We want to thank all donors and partners who made these projects possible.