On February 6, 2020, the International Day of Zero Tolerance for Female Genital Mutilation, WADI in co-operation with the Consulate of the Netherlands held a public event celebrating the results of a 15-year campaign. In 2019 no new cases of FGM were recorded in Garmiyan.

“The successful campaign to combat FGM in the KRI started fifteen years ago, in 2005 in Germian. Back then Wadi’s local Mobile Teams succeeded to break the silence surrounding female genital mutilation in northern Iraq, which up until then was considered to be an ‘African practice’”, Wadi explained in the invitation.

The event took place in Kalar, the capital of the region, and was attended by numerous media, among them Rozh news, Rudaw, Gali Kurdistan, Kurdsat and Xandan. Almost one hundred people, officials, activists and representatives from Civil Society organisations joined the debate.

Resonance in Kurdish media, both in Kurdish and English, has been impressive. Some excerpts:

“This historic moment will be celebrated on February 6, the world-wide day against FGM, in the capital of Garmiyan,” WADI said in a press statement.

“The whole campaign started in 2004 in Garmiyan and mainly because of hard work and awareness-raising, attitudes there changed,” WADI official Thomas von der Osten-Sacken told Kurdistan 24.

However, he added that in some regions near Erbil and Rania there are still FGM cases being recorded. “Although it is declining everywhere, luckily. Including in Halabja. But this relates [the decline] a lot what is done against it.”

From its offices in Sulaimani, workers from WADI have tirelessly worked with residents, authorities, and religious leaders that have been willing to speak to them. They have also made hundreds of trips to rural areas where FGM is most common to speak to villagers and give classes and presentations to educate women and local officials on the grave emotional trauma and serious health risks it poses. 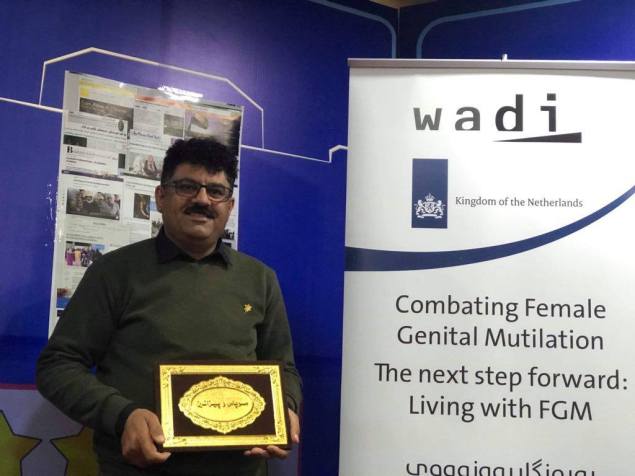 Picture: Assi Frood received an award for fifteen years of campaigning against FGM in Garmian

“I have met many women who said they are ready to mutilate their daughters, but they can’t find anyone to do it,” said Shokh Mohammed, WADI’s project supervisor.

WADI has pioneered action against the cutting of women and girls in the Kurdistan Region, working in rural villages for fifteen years to end the practice.

“We work on mentality, and that takes such a long time. At the beginning it was very difficult. We received a lot of death threats.. our staff were humiliated,” said Mohammed.

“They would tell us ‘you are making Kurdistan look bad’,” she said.

The NGO visits communities across the region to speak with locals and village leaders. As the taboos surrounded female health and sexuality remain strong, it is a long-term work in progress.

“A woman will never tell you she has been cut in the first visit. You have to build trust,” Mohammed said.

“You open women centers and women don’t come. You have to take change to them,” she added.

Iman Nuri, a member of a Wadi mobile team in Germian, said, “Wadi efforts to combat FMG has continued for 15 years in Germian, Erbil, Halabja, and Ranya and now Germian is free of FMG.”

Wadi helps any villages or areas free of FMG with services and projects that are in its capacity.

“It is a historic and happy day for all people of Germian because they are pioneer in zeroing FMG. This is an achievement and an honor. We hope that the other areas will take the same step,” Iman added.

Iman mentioned that After declaring that Germian is free of FMG, Wadi’s further efforts will be working on eliminating the effects of FMG and the issues that emerges from it.