WADI undertakes a new project in Koya for the Safeguarding of Cultural Heritage and Awareness Raising.

The Mahmud Agha Khan (Grand Khan) in Koya, dating back to 1277 H (1861-2 AD). is located in the heart of the bazaar near to the Great Mosque and must be seen as one of the key buildings representing old Koya. It provides a typical example of a Khan (trade building with accommodation facilities for people and animals) of that period and is one if not the only last example in Northern Iraq.  The building, however partly ruined, is still rich of interesting details, like the lintels and reveals made of so called “Mosul Marble”, which are decorated with geometric and floral encarvings. The entrance portal is lavishly decorated and contains an inscription, showing the above mentioned date.

Former repairs and stabilization measures are visible in many parts of the structure.

Before the execution of the safeguarding measures, the building was documented in its current state, using laser scanning and photogrammetry. As an emergency safeguarding, the endangered structures of the Khan had to be stabilized to halt further collapse.

Picture: Setting up an Info Billboard in the Old City

As a long term we envision a rehabilitation of the Khan in cooperation with the Department of Antiquities, the owners and the inhabitants of Koya.

Beside the practical interventions to prevent the building from further collapse, several activities were undertaken, as the erection of an information board in the bazaar area about the old town of Koya, seminars for school children and students on site and public gatherings to raise the awareness of the inhabitants of Koya about their precious cultural heritage and their memories of the past.

The project is funded by Aliph-Foundation and conducted in cooperation with Klessing Hoffschildt Architects GbR, the Department of Antiquities in Koya, the Koya University, Palacky University of Olomouz (Czech Republic), University of Pilsen (Czech Republic) and the Archaeological Survey of Koya Project (ASK).

Entrance to the Khan

Visit of a School Class 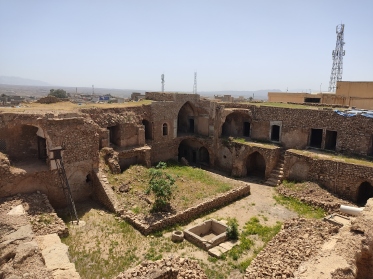