In Halabja Refugees are now running their own Radio Program. And the team is all Female. A Pilot Project in the Region. 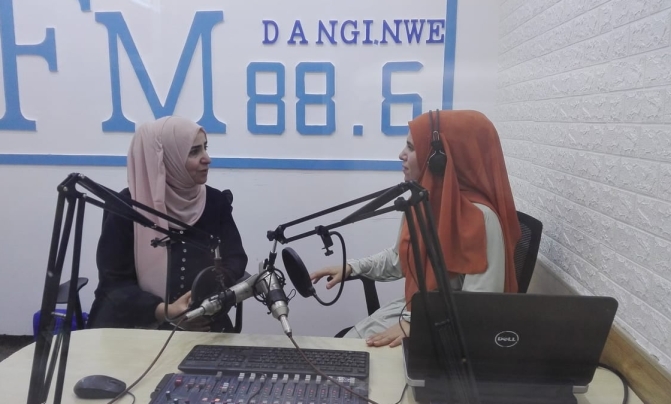 The ‘Refugee for Refugee Radio’ is a radically different community radio program where Syrian refugees, Internal Displaces Iraqi Arabs, Kurds and soon Yazidi’s discuss topics of interest, share vital information, as well as music that they enjoy: a program where young women learn how to be journalists and learn the technical aspects of radio. The radio airs in the Sorani and Kurmanji Kurdish dialects as well as in Arabic.

This project was launched on February 1st 2016.  Since then it has found quick success. The ubiquity of radio in the area means that everyone is able to access the channel, especially people living in refugee camps where life is both boring and extremely stressful. Four refugee camps are located in reach of the radio station.

In 2005, with WADI’s support, Radio Dengue Nwe launched as the first community radio in the area.  They now have tens of thousands of listeners and over the past 10 years have become an essential voice.  They provide the region with independent news reports, music, and entertainment. Themes they cover include: human rights, democracy, domestic violence, partnership, divorce, family planning, forced marriages, FGM and ‘honour killings’. 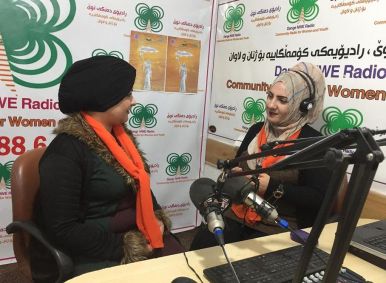 The ‘Refugee for Refugee Radio’ is the newest part of their listening program, and they have been instrumental in training the new young journalists.

Hanin -originally from Fallujah- is one of the new young journalists who recently trained in Halabja and is now on air daily as part of the ‘Refugee for Refugee Radio’. When describing Halabja -widely regarded as backwards, conservative and Islamist by the Kurds- in a recent interview Hanin explained, “this is a wonderful city, where we are respected as women and you can move freely”. Hanin also hopes that someday Fallujah will be as open and nice as Halabja. That motivates her; as she would one day like to open a community radio herself upon return to her home city that is still under control of the Islamic State (IS).

A Campaign for mutual Understanding

The ‘Halabja Campaign for Peace and Mutual Living’ and the ‘Refugee for Refugee Radio’ are part of the same movement for understanding and cooperation between the different groups in the city.  Specifically in the summer of 2015 Iraqi Kurds in Halabja (once refugees themselves from Saddam’s chemical attacks) decided to help Syrian refugees and Iraqi IDPs (mostly from Anbar and Mosul) in Halabja to share experiences, learn new skills, and to try to overcome the tensions between the different groups. 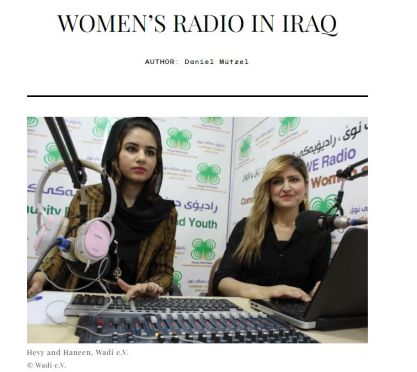 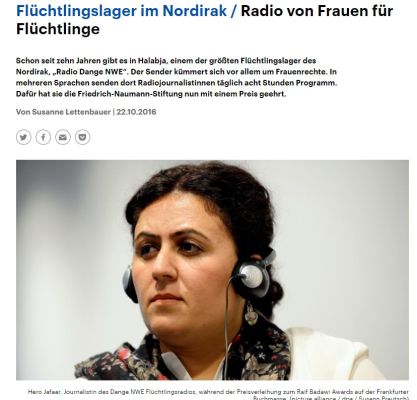 Some media coverage about the radio.

“This is Dange Nwe Radio, refugee-to-refugee segment, from 8am to 12 noon, broadcast in Kurmanji and Arabic,” a female broadcaster announces in a southern Iraqi accent. The early-morning programme includes Kurdish poetry, classic love songs by a Christian Lebanese singer, and pop music more familiar to listeners in Baghdad than in northern Iraq.

The four DJs tailor their programming to the thousands of families who have fled the ongoing violence and sought refuge in this rural corner of Iraq’s semi-autonomous Kurdish region.

With the support of the Halajba Women’s Centre, and Radio Dangue Nwe, long-time partners of WADI, a program was designed in response to local peoples wishes and the ‘Halabja Summer of Peace’ was born. Initially although the participants came with goodwill, there was a sense of distrust between the different groups. Separated by language, and having been on differing sides of the conflicts in modern Iraqi history, there was much to overcome. Many Kurds described seeing Arab refugees arriving in Halabja as a reminder of them of being refugees and fleeing to Iran, but it also a reminder of the Anbar campaign, and the suffering that many still have due to the sarin gas that was used against them.

Community radio has provided an incredible outlet for the young journalists

As the classes began, the women began to interact more, to share these experiences of displacement, and war. Instead of holding grudges, many if not most, decided to have relationships with the new refugees and IDPs, to counter stereotypes and help each other. Guliana age 18 from Qamishlo expressed her happiness about the campaign and its effect: “I am very happy here. No one discriminates against each other, it is a very special place, where everybody feels respected and loved. It is like a family!”

The project continues and due to its success was renamed to the ‘Halabja Campaign for Peace and Mutual Living’. The project creates opportunity for many to come together, learn a new language, take a computer course, or learn how to sew professionally, and finally much needed social gatherings are organized. The project has also provided much needed economic opportunity for the refugees in the city. As explained by Khadija age 36 from Qamishlo, the sewing teacher: “We want to stay here and don’t want to go to Europe. But for that we need support, financially, mentally. Then we would not consider becoming refugees again, but could stay here in Halabja.”

Why not a Radio for the Refugees?

Through this process, an idea came about. Why not have a radio program for refugees by refugees. Community radio has provided an incredible outlet for the young journalists. Many are displaced from their families, but are excited to now have a career, and a chance to live life on their own terms; the break in family structure can ironically be a new lease on life. All the young women are highly motivated to produce quality content and take their work seriously. As explained by Layla 22, from Hasaka where she was a first year law student, “I was sick for six months after leaving my studies but working at the radio made me feel better”.

In 2016 this program was awarded with the Raif Badawi Price for courageous jornalism.

Layla originally came for a sewing course at the Halabja Women’s Center yet after hearing about the journalism training offered through the Refugee for Refugee program she decided to join. After a one month training she now announces a sports new segment as well as working on montage and song requests.

Another team member, Hiva, 28, is from Kobani. After a month of training, she is one of the announcers for Arabic and Kurmanji segments as well as conducting interviewers. Hiva studied philosophy for two years in a university in Lebanon, as well as two of Financial studies Halab University. She is married and has a son, her husband worked as contractor and according to Hiva, they lived poorly. She explained that many people praised her for her Radio work, which made her feel happy. Hiva wishes to be announcer if she is ever able to go back to Syria.

The idea of building a community radio when upon their eventual return to their respective home countries or cities is certainly a long-term goal of the project, and part of WADIs idea of providing a framework that allows people to empower themselves.

Investing in a better Future

This thought was shared by Hanin: “I am very grateful that I can work here as a journalist! It has been four years of doing nothing, and now I am so happy.  I did not even know that something like this is possible when I was still in Fallujah. I am much more confident now and open when I talk to people. And I also like it very much that we are such a mixed team; I have not been with Syrians before.”

In the middle of all the turmoil in the Middle East these projects prove that another reality of coexistence and cooperation is possible. Most of the women from Halabja now running the Center were once refugees and fled to Iran after Saddam has destroyed their city. “We know what it means to live in a camp”, explains Hero, a survivor of the chemical attacks. “We had no support back then and we would have loved to have place for ourselves. Therefore we are trying to welcome these other women and children who are now fleeing war and destruction with open arms.”

During the inauguration of the Refugee Radio Hanin was wearing Kurdish clothes expressing her thankfulness for their new hosts. This was widely recognized inside the Kurdish community, because various TV stations reported about this event. And even Al Jazeera Arabic made a small documentary about the new radio journalists at work.

Shadan is from Halabja and belongs to the second generation of community journalists of Radio Dangue Nwe. Three years ago she herself passed a course offered by the radio. Now she is a mentor herself teaching Hiva, Hanin, Souzan and Layla how to be on air.

This unique project was made possible with support of various private donors and some funds from the Green Cross Switzerland.

You can support it with your donation too. 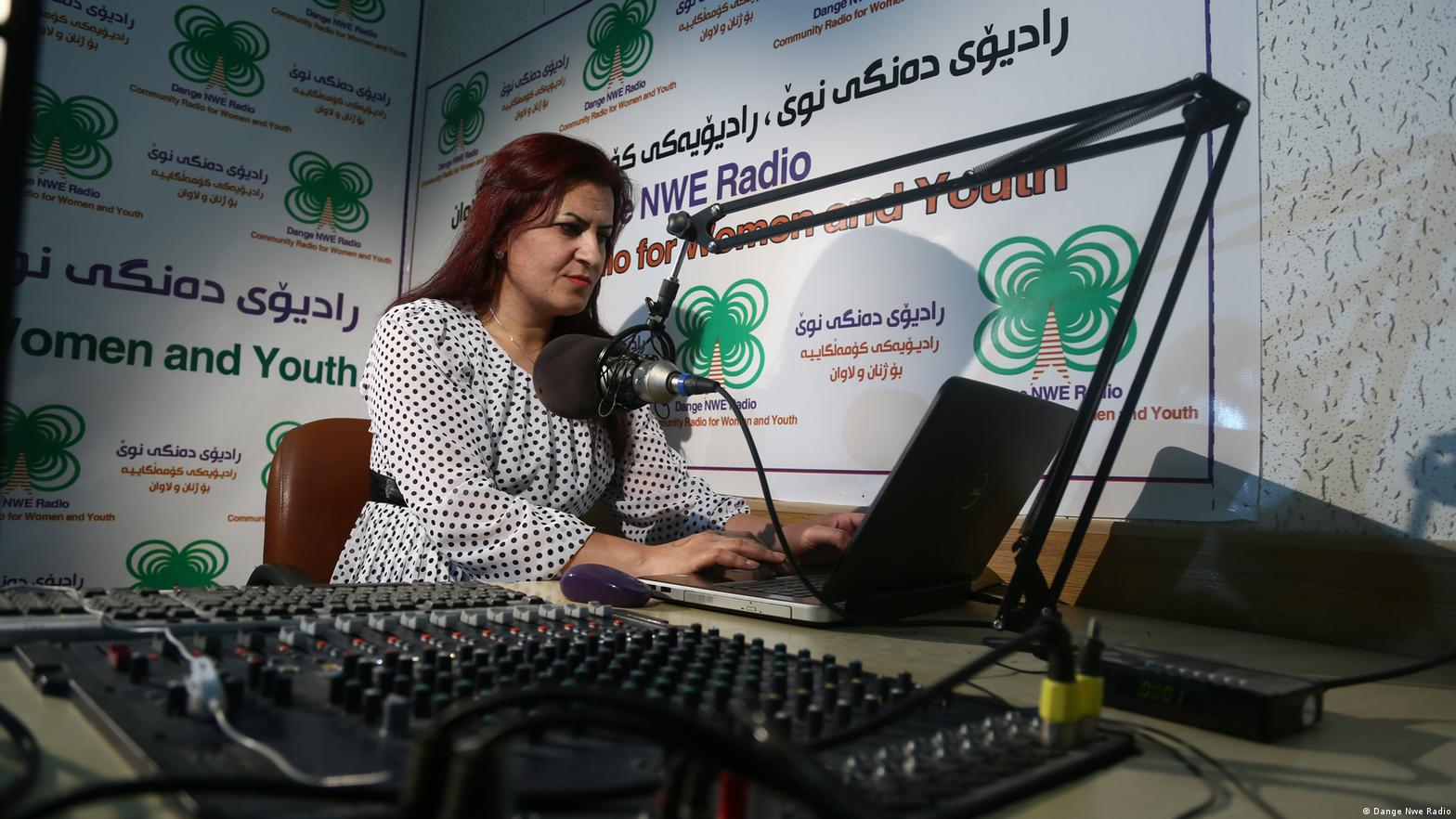 KirkukNow is an example of professional media coverage (2019)

Looking back: The Refugee for Refugee Radio in Halabja

Four displaced women from Iraq and Syria, now based in Halabja, Iraqi Kurdistan, are running a radio show for other…