All women led mobile teams; comb the Dohuk governorate of Iraqi Kurdistan, going to refugee camps, remote outskirts, and any place where Yazidi’s have found temporary refuge. These teams function in many cases as the first point of contact for girls who came back from ‘ISIS’ with many of the staff being Yazidis themselves. They provide whatever is needed.

In the Dohuk area WADI operates three mobile teams, each consisting of two social workers, two of whom are Yazidi to facilitate trust within the community, which can be understandably hostile to outsiders. The teams visit the various refugee camps in the Dohuk area, as well as remote areas where Yazidi’s have found temporary shelter. They offer psychosocial help, speak with survivors of Daesh terrror, and provide assistance for their daily needs such as organizing medical visits. The teams also provide a vital and often neglected part of relief aid: hygienic items, basic women’s health supplies and information. The teams also provide help with bureaucratic matters, referrals to legal assistance, and any other help that is needed. Their work was covered in this article by Fusion ‘These women-only units are helping girls who escaped ISIS‘.

The teams are a vital connection between those they assist and the outside world. They coordinate visits to the Jinda Centre which provides long-term support for victims of ISIS terror. They also follow up on its clients after their treatment, and continue to provide any assistance necessary. This has created a lot of trust in the community regarding the assistance work provided by WADI and Jinda.  The project has received international and local media attention. The Jinda Centre is now an independent NGO, as part of WADIs long standing strategy of providing support to local actors who then remain an integral part of our network.

The mobile team project is currently funded by Heartland Alliance and by Wadi. 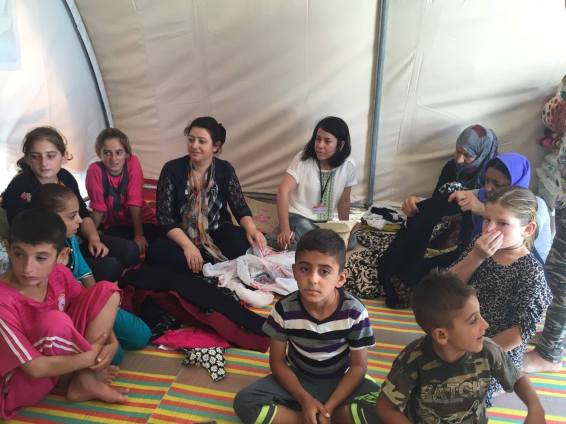 In 2014, ‘IS’ also known as Daesh took over the city of Mosul, and militias raided the nearby Sinjar Mountains, where adherents of a 7000-year-old religion, the Yazidis, live.  According to IS ideology the Yazidi’s are ‘unbelievers’ whose men deserve to killed, and whose women can be taken as slaves.  Since 2014 ‘IS’ has killed over 4,000 Yazidi men and boys and captured more than 5,000 Yazidi girls and women.

According to first hand accounts the girls and women captured by Daesh were systematically raped, and abused nearly to the point of death.  The women and girls that escaped, or managed to somehow return from captivity, are in dire need of assistance.  The immediate physical consequences of sexual abuse must be addressed- unwanted pregnancy, sexually transmitted diseases, and other issues- as well as the grave and far reaching mental and emotional trauma.  Conservative social norms, stigmatisation, and mistreatment by others, can often complicate the situation for these women and girls.

In the raid of Sinjar, those who were not captured sought shelter and refuge in the Dohuk governorate of Iraqi Kurdistan.  Resulting in large numbers of Yazidi IDPs in refugee camps and in unfinished ‘shell buildings’ in the surrounding areas.

To date the teams have been able to assist over 800 women and girls. The German Foreign Ministry (BMZ) supported the teams till December 2015. They are currently in need of funds to continue their invaluable work.