Some of the issues women in Iraqi Kurdistan face today are in part due to many of them not attending school. The effects of being deprived from education, growth, economic, political, business or administrative employment opportunities are deep. Despite the many attempts to empower women to participate and impact society, there are low numbers of women in politics, business and society in general.  One could even say that women’s’ status is going backwards instead of improving.

In the last few years the rate of girls dropping out of school has drastically increased, this is especially true in the villages.  The government has been unable to open schools in some villages, but more worryingly villagers are not allowing girls attend school in neighboring villages. Many excuses have been given to justify this, such as a family’s financial status, as a result girls from all over the Erbil area are not going to school.  Even more depressing, it seems that no one from the Directorate of Education, local NGOs or Media know about this problem, even the Director of Education of Erbil has denied this phenomenon.

This phenomenon might have the danger of creating an uneducated generation of women, who will be unequal to men. All these years of encouraging women to have their own job and income, will have been wasted. The voices that in the past demanded that women go to school, seem to have gone quiet.

Finances are the main excuse men cited for not allowing the girls in their family to attend school. However, Wadi teams in Erbil have noticed a pattern, that men are using this as a convenient excuse to gain full control over the girls in their families. When men were asked why they pull the girls out of school they most often said “because of our bad financial condition” when asked about why they did not pull out the boys they said “the girls should not go outside our village, and we do not have enough for all our children, the boys should not be deprived from school because they will be the head of the family in the future”.

It seems that ‘poor finances’ are just and excuse to allow men to have more control over girls future, and that in the name of ‘protection’ girls are being denied their basic rights.

The team took three villages as examples in Shamamk district in which according to Rafiq Aziz Esmaeil, Head Administrator in Shamamk district, the number of girls that left school after graduating primary school because there was no secondary or high school in their village were:

This is only the girls, the rate of boys leaving schools also was high. 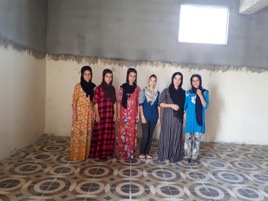 Wadi teams also visited the Director of Education and informed him about all the villages that do not have schools and all the students that are deprived from going to school. The Director expressed that he was surprised because he did not know that many of girls and students were deprived from school. He also said he will write a proposal for UNICEF and a number of other organizations to provide them with rooms and that teachers would be sent as soon as possible.