A conversation with Suzn Fahmi, Project Coordinator of the Jinda Center in Dohuk, on the situation of women and girls after the liberation of Mosul

Suzn Fahmi works as Project Coordinator for the Jinda Center in Dohuk.

For more than two years, Jinda has been taking care of Yazidi girls who have been abducted by the Islamic State (IS) and were held as sex slaves.

In 2014, IS kidnapped about 3,500 Yazidi girls and women into its self-proclaimed caliphate; systematically abusing them. In the summer of 2014, more than 350,000 Yazidis fled the Sinjar Mountains into Iraqi Kurdistan.

To date, most of them live in refugee camps.

Question (Q): Now that Mosul in Iraq and Raqqa in Syria are no longer under control of the Islamic State, in Europe it is said that IS has been defeated, so the war is more or less over. What is your opinion?

Suzn Fahmi (SF): For the Yazidis, this war will never be over. On the contrary, for many, the liberation of Mosul is another tragedy. Because there are still thousands missing, that IS  abducted in 2014.  Families hoped to finally learn something about their relatives. But that didn’t happen. They still do not know what happened to their sisters, daughters, brothers and fathers, whether they are still alive, were killed by IS, or died during the bombings. We had all hoped that the liberation would bring back those who are still missing.

The consequences of this catastrophe will continue to have effects for decades.

Now sadness and disappointment are high,  because there is little hope that they are still alive. There have been many, many reports that Yazidi’s were systematically killed before Mosul fell. One woman told us that IS militia members buried alive all those in their group who did not want to convert to Islam.  Somehow she was able to  escape.  Mass graves are now popping up everywhere, 47 have been discovered in the Sinjar region alone. So we have to assume that many of those who have disappeared have been killed, while others have been taken IS controlled areas on the Syrian-Iraqi border.

Their suffering will continue. But those (who have been taken) are only the young girls and the children, the older ones may all have been killed. And then, of course, under these conditions, many women commit suicide because they just can not stand it anymore. At the same time, international organizations and western governments are losing interest in the Yazidi tragedy, and there is much less help and support than two or three years ago when this issue was widely present in the media. The consequences of this catastrophe will continue to have effects for decades, and they will affect hundreds of thousands of people who still have to live in refugee camps and have few prospects of starting a new life.

Q: But some Yazidis have returned in the last few months and are also looked after by you?

SF: Yes, about two hundred girls and women and a few kids have managed to escape to Dohuk.  They are even worse off than the women who managed to escape between 2014 and 2016. At that time those who escaped were “only” victims of systematic rape, abuse, they were sold as slaves and had to experience terrible things themselves and watch others be treated that way also. But those who come now have not only had to endure three years imprisonment at the hands of IS, but also months of war and everything connected with it. They barely got anything to eat or drink, were locked up somewhere and many of them are not only doubly traumatized, but also injured, suffering from infectious diseases and malnourished. Their situation is terrible and they need intensive medical and psychological care.

We’ve looked after hundreds of returnees in recent years, and I’ve really seen a lot of misery, but the situation of these last women is particularly bad.

Then there are the children who came alone, they lost their parents and loved ones, or were torn from their families and taken by IS fighters. Some of them were toddlers at the time and have lost all connection to their background, speak no Kurdish, are Muslim-educated and do not even know which family they belong to. They are now in orphanages, here or in Turkey, and no one knows how to really help them. Some even reject, or do not recognize, their families because they have been brainwashed. And of course, they too are traumatized by the war and everything they have experienced. And then there are the children who were born in captivity… 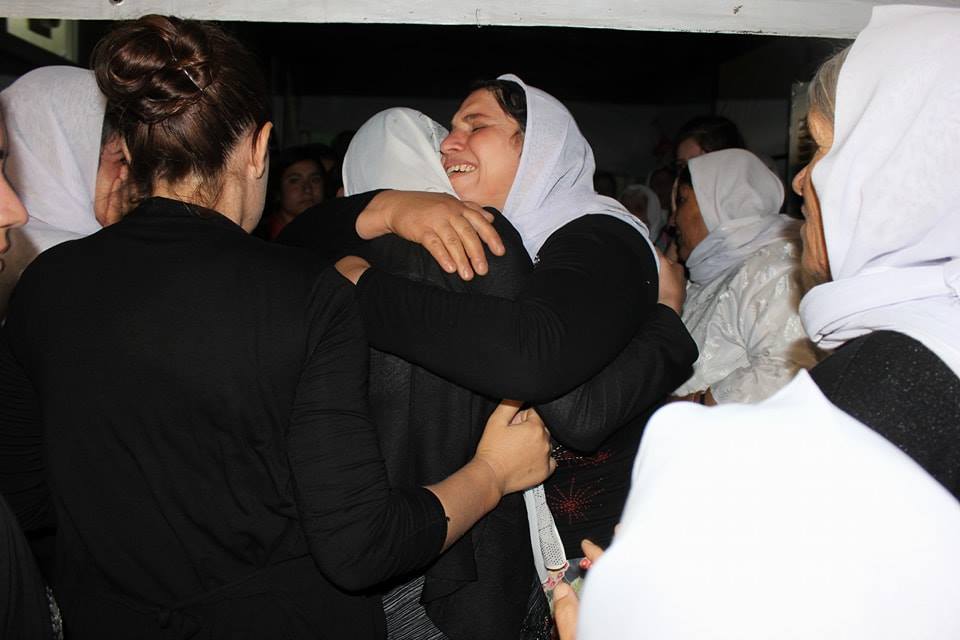 Q: Could you explain that a little bit more?

SF: Yes, of course, many of the abducted girls and women became pregnant (from rape) during their captivity, which was a sex slavery, and they had babies. Some of the babies are only a few months old. Many escaping women left these babies there or somewhere along the way because they did not want them and also know that their families would never accept children whose fathers are IS militiamen. But a few still want to keep their children and come with them to Dohuk. These babies are their children, too. But the families do not accept that. So they have to hand over their children. This is a huge problem and it really breaks your heart, but so far we have not found a solution, except that these children are virtually adopted by Kurdish families.

Q: What do you think, should be done urgently for these women?

SF: You need intensive care, psychological support, we should actually take care of them every day, also here in our center, try to offer them something beautiful. They do not want to talk for the most part, they are frozen. They need an idea of life, of dignity and freedom. That’s a huge task.

We’ve looked after hundreds of returnees in recent years, and I’ve really seen a lot of misery, but the situation of these last women is particularly bad. But we are lacking resources because, as I said earlier, this issue is not “trendy” anymore in Europe and the US. There, people have almost forgotten the Yazidis and think that there are other problems now. But that’s just not true, these women will need our help for years to come,  any kind of help. But I fear that the more the impression is created that the war with the IS is over, the more they will be forgotten.

The strained political situation after the referendum here in Kurdistan has made matters worse. As a punitive measure, Iraq shut down the airports and Iraqi troops entered Kirkuk. This has led many aid organizations to withdraw or shut down their programs. The victims are once again these women and girls.

My request: Remember what happened to these girls, do not forget what IS did to them and to others.

The interview was conducted by Thomas v. der Osten-Sacken  in Dohuk in Iraqi Kurdistan

Please consider supporting the work of Jinda with your donation. Subject: „Jinda“.