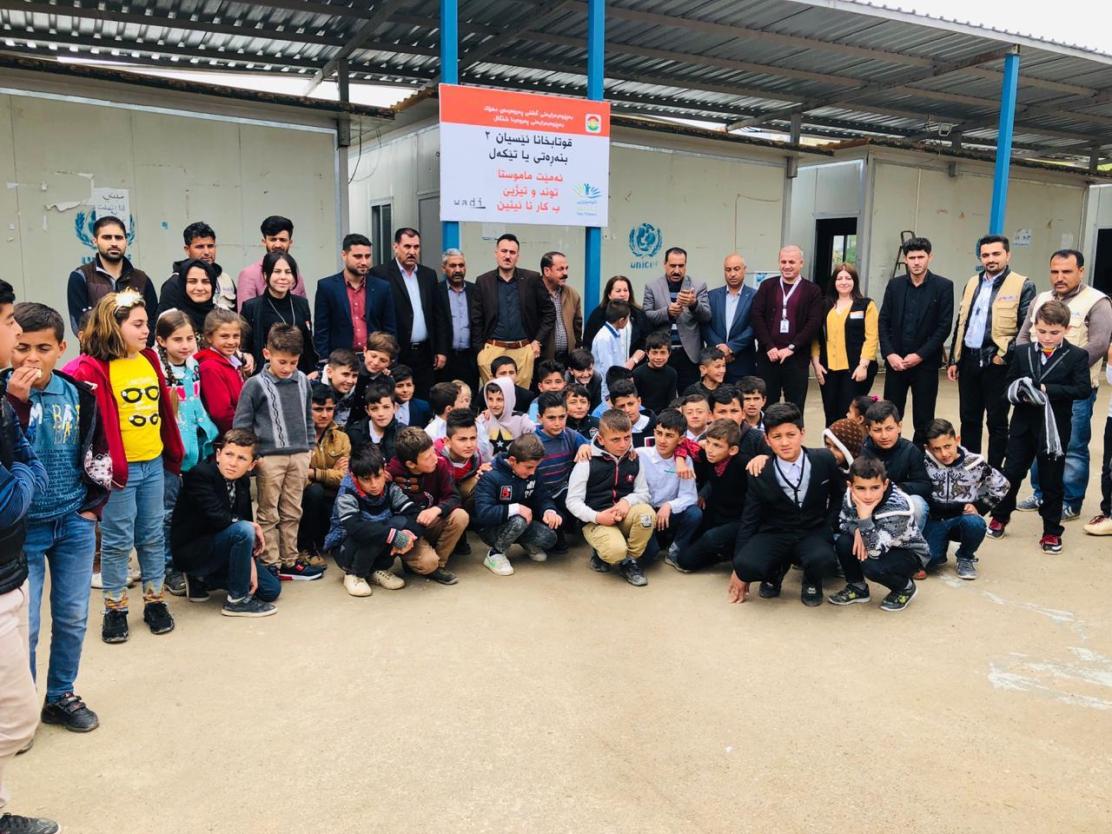 When we began our ‘No to Violence’ campaign in October 2017, we were optimistic, but we have been so positively surprised by the incredible results we are seeing. The campaign led by Wadi-Iraq has been actively advocating for ending all forms of violence in schools, by working with teachers, students and parents; three groups that could avoid unnecessary conflict, if only they had better communication skills. So far, 13 schools located in Erbil, Duhok, Ranya and Garmyan decided to join this campaign, declaring themselves free of violence.

The rates of violence in schools that are taking part in the campaign have been dropping rapidly, and the overall positive effects are incredible, and students passed their final exams at much higher rates!

This is especially impressive when you realise that the schools we are discussing are in IDP camps for members of the Ezidi community. The issue of violence was especially challenging, after what they have been through with ISIS since 2014, and now they are spending their sixth year in camps.

Wadi-Iraq has been working with this community since 2014 providing psychological assistance to women and girls who returned from ISIS captivity. In October 2018, Wadi Iraq team members Sara Hassan and Basma Haji, took their work to two schools in the camps. They worked with students on addressing topics of violence and how to deal with issues non-violent way. They also did the same with parents and teachers. In June 2019, one year after the campaign, we interviewed our team and Essyan Camp 2 School, on the changes and the challenges in this year.

The following interviews highlight different perspectives, experiences, successes and difficulties of one year of ‘No to Violence’ programs. You can follow the daily activities of the campaign on our No to Violence Facebook Page.

The background of your work is very different from other people, what do you think your community thinks of violence?

Sara: We think violence exists in all societies, including our Ezidi society, just like all societies, the type of violence differs from individuals and families’ intellectual background. But After 2014, I think my society is against violence generally due to what happened to us (ISIS coming).

Do you think the genocide has influenced violence in your community?

Basma: I think when ISIS came; they affected everything, including violence. Its effect was stronger on poor families, rather than more educated families. Now that nearly five years have passed, we see many people promote and support our ‘No to Violence’ campaign, this itself is a good change.

What has changed? Violence increased or decreased?

Sara: At the beginning, the rate of violence was high up to 60%, but we noticed major decrease in the schools we worked in as they belong to Kurdistan Government. But we hear that the rate of violence in the IDP schools in Nineveh governorate is very high, we even heard of issues of sexual assaults in schools of the camps.

Through your experience, what do you think should be focused on most with regards to the students?

Sara: I think the focus should be on visual aids and entertainment like drawings and music for these children to express themselves. Also to organize picnics and outings to distract them even for a short time of the conditions of the camps.

What do you wish the international community would know about what is like in the camps and violence here in general?

Sara: I think the international community should understand and see the violence that is happening between spouses and their children in the camps and another issue is mixed lavatories in the camps, which has resulted in a lot of harassment.

What are you your suggestions to Directorate of Education?

Sara: It is very important for DoE to provide a social worker or psychologists to the schools of the camps, along with increasing female teachers. We noticed the number of female teachers are really low, and it is necessary to focus on. Also we hope the schools get supported with computers, they only study these materials in theory.

27  June 2019, Sara (Wadi Iraq) sat with the Vice Principle (VP) Khilu Rafe Dihar of Essayn camp 2 school (Violence Free school), to reflect on the challenges and successes that occurred in the school since the ‘No to Violence’ program started in their school in October, 2018. Since the academic year ended what were the challenges you faced this year?

VP: This year we had big issues with lack of teachers, finding teachers specialized in their field is hard. Because there used to be 1700 teachers before if I am not mistaken, but now only 600 remain. Many left the country, many are based in other places. This affects the rate and quality of learning. Another big challenge was the lack of teaching materials aids visual aids. For example, for computer lessons, they cannot do anything practical, or for Physical education, drawing, all these lessons need materials, which we did not have.

What changed in your school since last year?

VP: This year Wadi visited us a lot, thanks to them, we noticed decrease of violence and increase of examination passing rates up to 70%. The topic of violence concerned us before too, because if child receive violence here, they would inflect it on their siblings too.

We hope, to sit with other teachers from other schools and share our experience maybe they will also follow our example.  We want to share the following statement:

Our School is Violence Free thanks to Wadi-Iraq

Violence is harming other individuals or groups of people physically, mentally and sexually, along with suppression of freedom of speech, the first categories who are subjected to this are women and children.

Schools have a large role in protecting children from violence. However, in many educational environments like the schools, inflict corporal punishments on individual and groups in the forms of beating and cursing. Many times affecting the children physically, mentally and psychological and social behaviors. Although violence is banned by 102 countries worldwide, yet there are so many not abiding these rules which seek to provide a safe environment for learning, many times children are even discriminated based on their social backgrounds or characteristics of physical and mental ability.

Since ISIS, violence has increased in Iraq, especially violence in schools, due to the lack proper educational background of teachers as they are not as informed of human rights and its importance. Because this is no longer about family and social environments only, but teachers have to go under proper training about human rights.

One of the biggest reasons that makes a student violent, is the harsh treatment of teachers and punishing him/her in front of other classmates, humiliating and mocking him/her.  This creates bad feelings and hate for the teachers, causing the child to behave worse, then the child loses respect for an adult who should act as a role model.

Before the genocide, violence in Shingal was much less, after 3-8-2014, due to all the violence that happened, even more violence was happening.

For the academic year of 2018-2019, Wadi team visited us regular really and guided our teachers and students to stay away from violence. We tired really hard to use everything we learned from them that is in monitoring students’ conditions in all aspects, in comparison to our previous years, we realized these methods are much better for students and teachers. Though it was hard to change the habit of many years but we were able to control the old ways.

Now the situation is very different, the students and the teachers are now more like friends, together we laugh and discuss things together during the breaks. This all had a positive effect on the students’ passing rate and increased it up to 70% which is high in comparison to previous years.

So now that we are among another 8 schools, as Violence Free schools, and received the plate, we hope other schools follow our example and stop using any forms of violence against students. We are ready to help out those who wish to learn of our experience with the No to Violence program and the increase of positive effects after we stopped violence in our school.

We wish for all schools to banish violence in their system, because it is like a contagious disease taken from school to home and vice versa.

We hope for Wadi-Iraq to also open trainings for teachers and encourage them to combat violence.

We as teachers also have to cooperate with Directorate of Education because they also lost a lot of their teachers after 2014. There used to be 1700 teachers during ISIS, but now only 600 remained. Some were kidnapped and killed, some left the country and some took leaves or transferred to other areas. The biggest loser of all this is the students.

Lastly, we as Essayn camp school 2 are in need of visual aids, and learning materials to further elevate our students and be an example despite the difficulties and secure top places in the region.

This project is supported by the Bundesministerium für wirtschaftliche Zusammenarbeit und Entwicklung (BMZ).