Speech given by Basma Haji at a meeting of the Coalition for the International Court in The Hague on December 5th 2019.

We are a peaceful religion whose number in the world does not exceed one million people and the largest amount of this number is living in Iraq; specifically in the region of Shingal, as well as in Sheikhan, Bashiqa and Bhzan.

The name Yazidi comes from the word “az-dam” which means “who created me”. I lived in Shingal in Northern Iraq. We relied mainly on farmers and we were marginalized by all the governments and leaders of Iraq.

Most of the Yazidi compounds lacked the most basic means of living, including water, electricity, and most importantly: schools. We are still suffering from marginalization because we are still considered as “infidel” as we are not the people of the holy Quran and killing us is considered “halal”.

6417 Yazidis of both sexes were captured. All the men were killed and the women and children were taken

Arabs and Muslims, specifically in our regions, did not eat the food we cooked and didn’t even shake hands with us. They did not let us work in their offices and laboratories and did not buy our agricultural crops. This discrimination still exists until now because the constitution of Iraq is based on Islamic law, which considers the Yazidis infidels and killing them halal. Even if it is not mentioned in the constitution we suffer from bullying and discrimination throughout our life. We used to live a simple life. Our dreams were simple. We did not ask for anything, we just wanted to live. Through the ages we have been exposed to 74 campaigns of genocide because of religion; the last on 14th August 2007, which killed more than 1500 people in one day.

Because our regions were rural there was no media to focus on us.

Most of the people of Shingal are poor. They didn’t have cars and so they went to the Shingal Mountains. Those who had cars went with their families to Kurdistan Iraq because it was the closet safe area. On the same day 6417 Yazidis of both sexes were captured. All the men were killed and the women and children were taken. They sold Yazidi women as the cheapest at the market and recruited a large number of children in training camps.

There they trained them to kill the Yazidis because they are infidels and forced them to change their religion.

So far, 3524 girls and women have survived in different ways and 2893 are still suffering in the grip of ISIS. As a result, thousands of widows, kids and orphans are suffering. Lots of Yazidis left Iraq in very dangerous ways through the sea to run away from being killed and to flee to safe places like Germany, the Netherlands and Greece to escape from discrimination and bullying. 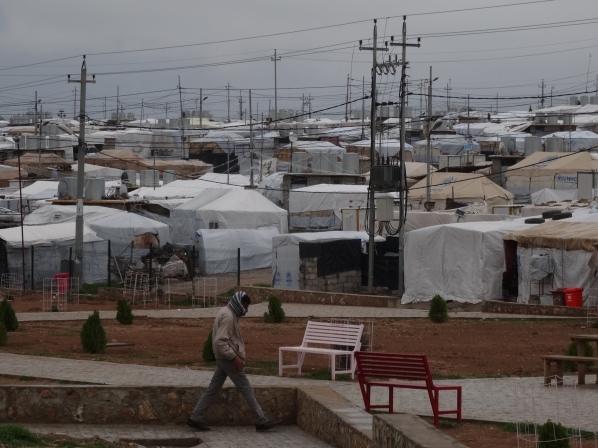 Until now, about 80% of Yazidis live in IDP camps because our areas have been completely destroyed as well as the religious symbols of the Yazidi religion. We have lost trust in all defense systems of Iraq.

1. Our main demand is that all perpetrators are judged in a fair trial and under international supervision to bring justice. We refuse to prosecute ISIS members in local courts because they consider it another genocide against the victims as they will be executed according to article No. 4 and that will be the execution of the witnesses.

3. Establishment of a team searching for the abducted, especially in the camp (Holi), where the families of ISIS in Syria and a lot of Yazidi children are among them. Also, we need a research team to enter the camp.

4. Pressuring the Iraqi government to join the Rome Convention and the International Criminal Court to consider what happened to the Yazidis a genocide.

5. Provide adequate financial support for the affected and displaced people and the reconstruction of our regions and compensate the families of the martyrs as martyrs of war.

6. Rehabilitation of the survivors from ISIS, especially children, who have become a threat to the community because they have been trained for five years on fighting and criminal ideas have been built in their minds and currently they live without any care in the displacement camps. These ideas negatively affect the rest of the children in the camps.

7. Establishing a court outside Iraqi territory in order to protect the victims and not fear the national authorities.

8. We call the Government of the Netherlands to return ISIS members of Dutch nationality and to prosecute them fairly.

Thank you very much

Basma Haji works for the German-Iraqi NGO Wadi since 2014. Currently she is responsible to implement Wadi’s “No to Violence Camapign” in Dohuk Governorate. During the last years she was member of a Mobile Team that took care of hundreds of girls and women who returned from ISIS’ captivity.