February 6 2022, Wadi held a conference on the occasion of the International Day of Zero Tolerance for Female Genital Mutilation (FGM), the conference was held to highlight the Wadi’s longterm approach to eliminating FGM in Iraqi Kurdistan, discuss sucesses challenges, and future goals of the campaign that began in 2004.

The conference was well attended by NGOs, press and activists. Wadi staff presented the campaign with its key moments, successes, and challenges over the course of the years. Partner NGOs and activists of the campaign also presented their experiences. A lively discussion and question and answer session followed the presentations.

While the latest numbers are really encouraging and indicate that in Halabja province, FGM is not practiced any more. In 2020, Wadi was able to declare that there were no new FGM cases recorded in Garmyan. The region is considered FGM-free. Now the same has become true for Halabja. But, in spite of this encouraging news, there is still so much work to do, and Wadi’s capacities are limited. Hence, Wadi has been calling on other actors, be it local activist organizations, international organizations or UN bodies, to step in and boost the efforts.

Wadi team member reported on the situation in Erbil, where FGM is still practiced at high rates. Parts of the society in Erbil are more conservative and traditional, and they believe FGM should continue because they consider it part of their identity. Wadi will continue to develop strategies to combat FGM must be adapted to the circumstances and mentalities on the ground.

The role of men in combatting FGM was also brought up both in the presentation and in the discussions. Wadi has made the role of men a specific focus of the campaign, but more can always be done, several NGOs in attendance expressed that they would also like to include men in a more prominent way.

There was also a lively discussion about the situation of FGM in the south of Iraq, with some activists saying it is not practiced there while others have evidence that it is, but the discussions concluded with the agreement that more data is needed, and that a large institutional study should be conducted. Moreover on a legal standpoint, there was a consensus that a push for banning the practice of FGM in Iraq and not just in the Kurdish region would be a positive push to end the practice for all of Iraq.

There was also discussion of calling for renewed commitment to ending FGM from religious clerics, and from the legislative side as well, as there has recently been discussion of amending the Law no. 8 which banned FGM as part of its larger push to end domestic violence and violence against children. All NGOs and activsts agreed that lobbying for FGM to remain banned legally was of the utmost importance. Other NGOs also expressed their frustrations that till now not one FGM case has been tried under the law, and that they would like to see more implementation of the law at that level.

One NGO asked if the brochure produced by Wadi could also be translated into Arabic, as it was available in Kurdish and English for the event. Others asked why the UNFPA and parliamentarians were not invited to the event, and Wadi explained that they were, but declined to attend.  Wadi would have welcomed their presence and input on the situation of FGM in Kurdistan, especially after the ambitious KOMBI plan that was announced by UNFPA and the High council for Women in 2019. ‘Female Genital Mutilation COMBI Plan for KRI 2019-2020’ was a cooperation between the High Council of Women Affairs (KRG) and UNFPA, supported by the European Regional Development and Protection Program for Lebanon, Jordan and Iraq (RDPP). The COMBI plans goals were to have an 18 month intense public communication plan. The KOMBI plan was highly anticipated, and we would have welcomed hearing about the successes, and lessons learned.

Following the conference renewed interest in FGM led to reportage in local media, this is essential in keeping public attention on the issue.

Wadi’s Capaign against FGM in Kurdistan

Brochure: A Handful of Ash

Published in  2022, this brochure highlights two decades of Cpmbating FGM 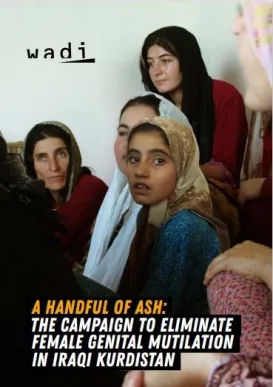