With our “Living with FGM” program we are reaching out to women and girls who were mutilated in their childhood and help them to find ways to deal better with what has been done to them. Two women, who joined our seminars, are speaking out what they went through.

20 years after Wadi health teams first made public that they found genital mutilation of girls to be widely practiced in Kurdish Northern Iraq, this “tradition” is still persisting in many parts of the region, despite a legal ban in place since 2011.

In certain areas like Garmyan and Halabja, however, Wadi and its local partners have been able to show that continuous awareness efforts eventually pay off: In both areas the FGM rate has come down to zero – proof that FGM can be eradicated if you invest in a lot face-to-face awareness on the ground. Wadi launched an ongoing region-wide Stop-FGM-Kurdistan campaign, lobbied successfully for a law against FGM and involved the media. However, Wadi has only limited resources and there have not been many other organizations stepping in. Hence, large parts of the Region remained uncovered until this day, and FGM is still an issue of concern in Northern Iraq.

About 10 years ago, Wadi had been able to produce and air some FGM awareness clips on local TV.

We still meet people who mention them. TV is definitely a great educational tool because it can reach the masses, yet our teams found that it works more like a preparation for change, i.e. TV awareness alone usually does not lead to actual behaviour change.

In the model areas where Wadi staff and its local partners have invested so much time and effort to bring the FGM rate down, the second phase of the campaign has begun: ‘Living with FGM’. Little girls are not subjected to FGM anymore, so the ‘tradition’ will die eventually, but still many thousands of girls and women have to live on with the grave consequences of FGM. The goal of ‘Living with FGM’ is to mitigate the physical and psychological suffering caused by the mutilation, find individual and collective ways and strategies to cope with the limitations, create a supportive network of affected women, and include also men because solidarity and mutual understanding are crucial for this endeavour.

The following interviews have been conducted by Wadi staff members. Both interviewees, women from a village in Kalar district (Garmyan), are participating in the new ‘Living with FGM’ program.

Sewa Amin (name changed) was born in Rzgary subdistrict in 1984. After tying the knot, she returned to her homeland, Goban village. In the interview, she spoke with Wadi about her experience with FGM.

“My father has two wives. He has five daughters from his first wife who are all mutilated. I’m his daughter from the second wife. My mother has one son and three daughters. Our house was located in Penjhazar neighborhood – Rzgary subdistrict.

I remember vividly and I will never forget, I was six years old. Once we went to visit my grandparents in Hawthazar neighborhood. I saw a group of young girls, mostly 10-year-old, gathered in a house, getting mutilated one by one in a queue. The horror and screams covered the whole street. One of the girls who was older than us ran away in the middle of the procedure. Half her clitoris was cut. That girl is still my friend and she’s still living with a half-mutilated genital.

Tens of girls mutiliated at the same time

There were so many girls that the midwife had to separate us into two groups. The first group was above 10 years old and the second under 10 . My older sister was in the older group. They got mutilated in one house and those under 10 years in another house. The girls came out screaming and unable to walk. I asked them why they were like that. They said we got mutilated. I, not knowing what that is, got excited and thought it was a fun thing. I collected my friends, I ran to my mother and asked her to give me a razor blade so I can go to aunty Sabri’s house and get mutilated. My mom was very happy and excited. She immediately gave me a razor blade. I ran to aunty Sabri’s house. She was a woman in her forties living in the neighborhood. I went there and then they suddenly grabbed me and stripped my pants. They started cutting me. I was in shock. I screamed my lungs out. Then they said: You can go now. I realized what mutilating was and I was filled with regret. I got very sick and bleeded in my bed for three days.

“FGM left a wound in me that I will never forget.”

My younger sister, however, didn’t get mutilated. Meanwhile, they had told us about the harms of FGM, so she was rescued thankfully. Years after that, aunty Sabri moved out of that neighborhood, so my mother replaced her. She started mutilating young girls! First she started with our extended family, then she continued with the girls in our village. One day, a man and a woman from your organization visited us and told us about FGM and its side effects. From then on, my mom decided to never mutilate anyone again.”

“FGM left a wound in me that I will never forget. I always speak of it with sorrow because there was no one to warn us about it like Wadi does. No one told us that it will make us handicapped women. Until the day Wadi came to our village and told us that FGM is harmful and not related to Sunnah [demanded by Islam], none of us knew.

When I was a girl, I had many health problems of which I did not know they were related to FGM. When I reached 13, I was married off to a guy I did not know. I was suffering from inflammation and other issues, including difficult child birth. I visited the doctor many times, but I never thought my health issues had anything to do with me being mutilated. Of course, not being mutilated caused me problems before. They always used to tell me that the food I make is haram and filthy because I am not mutilated.

“I don’t want my daughters to even hear about FGM.”

A few years ago, I participated in a seminar of Wadi about FGM. It affected me tremendously. Even until last year, I was firm on mutilating my daughters, but after that seminar I was completely convinced to not perform this practice. I don’t want my daughters to even hear about FGM. I wish the practice completely vanishes because it is affecting women’s sexual drive.

If it was not for Wadi, my daughters would have been mutilated long ago. I hope you continue spreading awareness.

I mean especially the ‘Living with FGM’ program. During the five sessions we learned to recognize mental, sexual, health related problems of FGM and pass this information to our husbands to seek support”.

Chnur Ali (name changed) was born in 1985. She used to live in Dawlatabad-Kermanshan (Iran) for a few years. Then she and her family came back to Iraqi Kurdistan. Now they are living in Goban village. Chnur told Wadi:

“I was very young when my mother passed away. I lived with my stepmom my whole life. When I was six years old we were living in Iran back then. My father insisted that I get mutilated or else he won’t drink water from my hands. So one day my uncle’s wife who had six sisters who were all mutilated brought an old midwife who was 60 years old. She mutilated me and her daughter. Everyone in my family was mutilated. This is like a tradition for us. My father was very happy. I don’t remember what they gave the midwife in return.

No idea what was going on

The day the midwife came to our house, I had no idea what was going on. They did not tell me anything. I was not prepared and no one asked for my consent. All I knew was that they grabbed my cousin and dragged her to the other room. I heard her screaming. Suddenly they grabbed me, too, and I was trying very hard to run away, but it was too late. They mutilated me and told me to get up and stop screaming. I was in so much pain, without a mother all alone, I bleeded for a week and I could not eat or sleep.

And then we migrated from Iran to Iraqi Kurdistan. Some years later when I was 16, I got married and moved to Goban village.”

Chnur is a participant in Wadi’s ‘Living with FGM’ program. Chnur continued and said:

“When I got married, I constantly had problems during sex, low sexual drive, pain. Mentally, I’m very depressed and tired. This caused problems between me and my husband, but we never thought this was related to FGM. We always thought it was our fault, it never occurred to us.

“I did not mutilate any of my girls.”

Even until last year, I believed in FGM and I was willing to mutilate all of my six daughters because I thought it was Sunnah and I am doing a sin by not mutilating them. Yet, then I heard the mullah say it was not demanded by religion, and I heard about the law against FGM on TV, then we had Wadi’s seminars in the village. This convinced me that it was a harmful practice, so I did not mutilate any of my girls.

My husband knows I am mutilated, and he often helps me and supports me. He knows that it is affecting our sex life.

I firmly believe without Wadi’s campaigns against FGM my daughters would have been mutilated by now. I always bring the booklets and leaflets home, although I cannot read I give them to my daughter to read it out for me. So I learnt about the law No.8 against FGM and domestic violence. When I think of all the lies the midwives fed us, about Sunnah and how unmutilated girls are filthy and sinful, shame on them.

Many times, I passed the information to my relatives and friends. I warn them not to mutilate their daughters and give them all the other information about health and mental issues related to FGM. I hope the same seminars are presented to men, so they can feel our struggle and understand us.”

This project is supported by the Dutch Foreign Ministry. More information about our campaign to #StopFGM here.

Published in  2022, this brochure highlights two decades of Combatting FGM 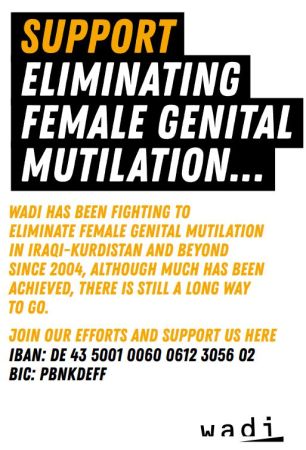