In 2013 Wadi supportet a first small scale research about the prevalence of FGM in Southern and Central Iraq.  UNICEF published a Multiple Indicator Cluster Survey in 2011 and asserted this practice does not exist outside the areas of Iraqi-Kurdistan and Kirkuk.

According to this first small research the UNICEF findings are higly doubtable and therefere WADI calls for a new wide scale research.

The following article was published by the Iraqi Civil Society Solidarity Initiative in 2014:

A first independent study on female genital mutilation in central/southern Iraq finds that 25% of the women in these regions were subjected to this practice.

The study was conducted in early 2014 in cooperation between physicians, women’s rights and civil society organizations. The researchers’ identities remain undisclosed due to securitiy concerns. 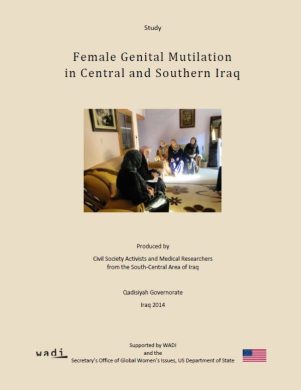 500 women in Wasit province and 500 women in Qadisyiah province were sampled for the study. The data collected suggests that most women are subjected to FGM in childhood, especially before the age of 10. The most often cited reasons for the practice are religious belief, cultural heritage and tradition; it is most commonly performed by a nurse or a midwife.

In light of the challenging security situation and social circumstances under which the study was conducted, the results are to be taken as preliminary indicators urgently demanding further research. Data presented by UNICEF last year suggested that FGM is almost inexistent in southern and central Iraq. The new findings cast considerable doubt on this conclusion and are calling for further thorough investigations.

Female genital mutilation is a grave human rights violation and a form of violence against women according to the UN Declaration on the Elimination of Violence against Women. Its eradication is explicitly recommended by the international bodies for women’s rights.

The new study contributes to groundbreaking research work on the prevalence of FGM in the Middle East. Until recently official data claimed that FGM did not exist in the Middle East and was in general “an African problem”. In 2009 the German-Iraqi association WADI conducted the first comprehensive area-wide research on FGM in Iraq’s Kurdish provinces which found an alarming prevalence rate of 72%. A similar study conducted in Kirkuk(Northern Iraq) in 2012 revealed a 38% prevalence and gave irrefutable evidence that FGM is not restricted to the Kurdish areas.

Subsequently, the Stop FGM Middle East campaign was launched. It has made many efforts to uncover the true prevalence of the practice across Iraq, the region, and in other parts of Asia.